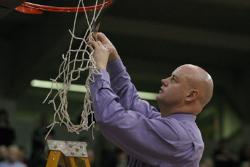 "It’s a sweet feeling," said head coach Jeff Guiot. "I’m happy for the players and especially Jim. These kids have worked hard from day one. They’ve just had great attitudes and I couldn’t be prouder. We were getting good shots, they just weren’t falling. But then in the 2nd half they started dropping for us."

SBU, ranked #23 nationally, was perfect at home this season, with a 15-0 mark in Bolivar.

The win gives the Bearcats a 20-6 overall record, a 13-4 MIAA record, a regular-season MIAA Championship, and a guaranteed #1 seed in the MIAA Tournament.