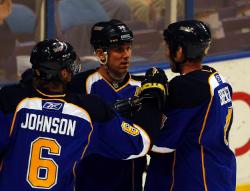 After giving up a goal on the first shot he faced, Dallas Start goalie Marty Turco turned aside the next 26 as the Dallas Stars rallied with three goals in the third period to beat the Blues 3-1.

The Stars only mustered 21 shots on goal for the game, and only seven in the final period, but there first three shots of the third period all went past Manny Legace.  Loui Erickkson scored twice for the Stars who won for the first time in five games at St. Louis.

Keith Tkachuk got the Blues going early, just a 1:31 into the game on a power play goal after Dallas’ Erickkson was called for slashing.  Head coach Andy Murray very frustrated by the lack of goal scoring as the Blues have managed just three goals in their last 113 shots on goal.  Click on the link to hear his comments.

The Blues are now 0-3-1 in their last four games and are six points out of 8th place.  The Blues are in 12th place with 66 points, chasing Nashville with 72.