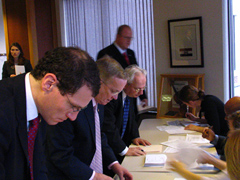 Times might have lessened the urgency to show up early at the Secretary of State’s office on the first day of filing for the August primary election, but plenty of candidates lined up as the doors opened this morning.

First in line was Richard Kline of Gypsy. Kline said he got up early to make the drive from southeast Missouri to Jefferson City to file as a Republican for governor. The early arrival and front-of-the-line position didn’t seem to help. Kline drew number 382 from the fishbowl at the Secretary of State’s office. Random drawings determine ballot positions. The lower the number drawn, the higher the placement on the ballot.

Drawing numbers for ballot position beats waiting in line for weeks to hold a ballot slot, according to Secretary of State Robin Carnahan . Carnahan recalls sleeping on the cold, marble floors of the Capitol to hold a place in line for her father, the late Governor Mel Carnahan, when he ran for State Treasurer in 1980.

“I will tell you; those marble floors are hard to sleep on,” said Carnahan.

Times have changed since then. Candidates no longer wait in line for weeks to hold a coveted ballot position. The Secretary of State’s office has moved to the James Kirkpatrick State Information Center, located just west of the Capitol. Candidates seem to still prefer filing on the first day and about 300 are expected to sign their paperwork by the end of the day. Those who file after today will be placed on the ballot in order of filing. Approximately 600 candidates are expected to file by the time filing closes March 25th.