Now, I’ll be the first to tell you that I don’t know much about bull riding, other than guys in cowboy hats, sometimes hockey helmets (why not always?), who wrap their hand tight to a 2,000 pound animal that is not very happy, and hope they can hang on for 8 seconds. 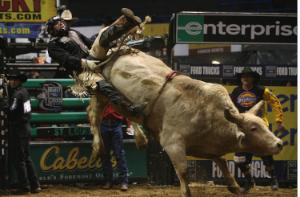 Two Missourians are in the top 45 right now.  Dustin Hall from Springfield is 34th overall and Luke Snyder from Raymore is 20th overall.  This photo of Hall flying off the back of China Grove is awesome (Bill Greenblatt of UPI).  I had to get a better understanding of this sport, so I went their website www.pbrnow.com .

Little did I realize that for the last 15 years, bull riding as become a sport by itself, separate from other traditional rodeo events.  So here’s what I learned.

Headquartered in Pueblo, Colorado, the Professional Bull Riders was created in 1992 when a group of 20 bull riders broke away from the traditional rodeo scene and decided to start a circuit for bull riders only. They felt that, as the most popular event in a rodeo, bull riding deserved to be in the limelight and could easily stand alone. Each rider invested a hard-earned $1,000 dollars, a few of them borrowing from family and friends, to start the PBR. Today, more than 800 bull riders from the U.S., Canada, Brazil, and Australia hold PBR memberships. They compete in more than 100 bull riding events per year on either the elite tour, the Built Ford Tough Series (BFTS), or the two minor league tours, U.S. Smokeless Tobacco Company Challenger Tour, for a chance to qualify for the PBR World Finals in Las Vegas and win the coveted title of PBR World Champion.

If you want to check out the Professional Bull Riders, you’ll have another opportunity when the bull riders return to Missouri on March 8th and 9th when they compete in the new Sprint Center.