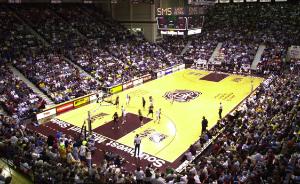 The opportunity to look to both the past and the future will be on tap when the two Missouri State University basketball teams play their final games in Hammons Student Center in upcoming days. The final men’s game will be Tues., Feb. 26, when the Bears play host to the newly-crowned 2008 Missouri Valley Conference champion Drake Bulldogs, and the women’s final contest will be Sat., March 8, when the Lady Bears meet the Creighton Bluejays. Both games will have 7:05 p.m. starts, and each will be Senior Night for the senior members of the respective 2007-08 Missouri State teams.

Missouri State is issuing a general invitation to all former Bears’ and Lady Bears’ players who played in one or more games in Hammons to return and be introduced at the appropriate final games. Former Missouri State players from the Hammons era (1976-2008) who plan to be in attendance should contact the appropriate basketball office. The men’s basketball office is (417) 836-5250 and the women’s basketball office is (417) 836-4136. Commemorative souvenir final game tickets will be given to the first 4,000 fans in attendance at the final men’s game and also at the final women’s game. Limited edition final game programs will be on sale at each game.

The final game programs will include a listing of the scores of regular season games played in Hammons, as well as all-time Hammons Student Center Bears’ and Lady Bears’ basketball player trivia quizzes, with free Mediacom services to one winner from each game.  And, last but not least, the University will honor Springfieldian and Missouri State alumnus John Q. Hammons. Mr.Hammons provided $1 million to the University in 1976 for the building of Hammons Student Center, and it is his donation of $30 million that is the lead gift in the construction immediately east of the current arena of JQH Arena, set to open for the 2008-09 Bears’ and Lady Bears’ seasons.