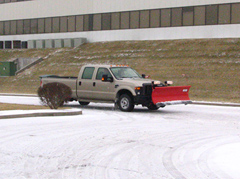 Winter isn’t ready to let go of its grip quite yet.

Missouri has been hit by a late February winter storm. The National Weather Service reports a storm system has developed over the southwest United States which has sent moisture throughout the Midwest. Nearly all of Missouri is affected. The upper northwest tip and the lower southeast tip seem to be the only portions of the state not now receiving freezing rain, sleet or snow.

Captain Tim Hull with the State Highway Patrol headquarters in Jefferson City reports that hazardous road conditions are continuing to deteriorate. Trucks with the Missouri Department of Transportation have been salting roads since early this morning. Still, precipitation continues to fall, making it difficult to keep roads clear. Most major roads are reported covered or partially covered by MoDOT, with only a few clear spots on the MoDOT Traveler Information Map .

This storm system won’t be leaving anytime soon. The Weather Service expects precipitation to keep falling throughout today and into tomorrow. The freezing rain and sleet might change into snow before the system leaves the state, expected sometime Friday afternoon. The system is expected to hit the state south of the Missouri River the hardest.