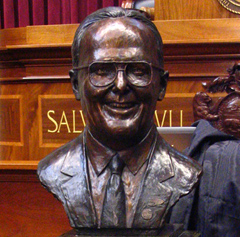 Lamar Hunt became the newest member of the Hall of Famous Missourians as a bronze bust of the owner of the Kansas City Chiefs was dedicated during a ceremony as the State Capitol.  Hunt was selected for inclusion in the Hall by Missouri House Speaker Rod Jetton, R-Marble Hill.

Hunt may be best known as the guiding force behind the formation of the American Football League.  As the founder of the AFL, he helped lead to the growth of modern pro football as he had a major hand in merging the AFL and NFL in the late 60’s.  He is also credited with naming the "Super Bowl" coming up with the name after his children’s toy "Super Ball."