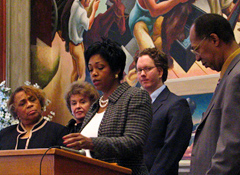 The organization Better Courts for Missouri has filed an initiative petition to, in its view, "inject openness and accountability into Missouri’s judicial selection process."

Better Courts for Missouri claims a powerful club of trial lawyers continues to fight on behalf of the "good ol boy network" for a secretive judicial selection system in which they can appoint judges friendly to the interests of these attorneys.