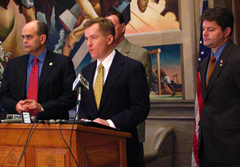 Governor Matt Blunt and leaders of the Missouri House and Senate are standing behind Representative Steve Hunter in his call for Attorney Jay Nixon to provide what Hunter says is needed information regarding the Second Injury Fund, which Hunter claims is headed for insolvency.

Hunter wants to know who is liable for payments derived from settlements and decisions once the impending solvency of the Second Injury Fund is reached. He wants to know whether the State Treasurer has the authority to pay out of the Second Injury Fund if the fund does not have a sufficient balance to meet the obligation. He also wants to know whether it is the responsibility of the Attorney General or the State Treasurer to decide who will not receive compensation from a soon depleted fund since no provisions exist within state law for continuing payments from another source.

John Watson, Attorney General Jay Nixon’s Chief of Staff, says the AG’s office has made itself available to legislators with questions on the Second Injury Fund. Watson adds the very nature of the letter is based on a premise that the fund is financially insolvent. He says the Attorney General’s Office is not the custodian of the Second Injury Fund – Its task is to defend claims made against the fund.