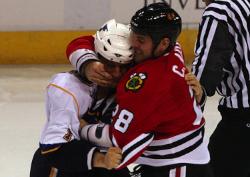 As soon as the puck dropped, so did the gloves.  The Blues Dan Hinote did get the best of Hawk Craig Adams (after getting a facial), and then the powerplay got going again, as the Blues find themselves just three points out of the last playoff spot in the Western Conference following last night’s 5-1 win at home over the Chicago Blackhawks.

The Blue’s powerplay has struggled all season, but after three goals with the man advantage against the Kings on Sunday, and another three goal night against the Hawks, the Blues moved out of last place in the NHL in powerplay efficiency.

Barret Jackman, Lee Stempniak, and Keith Tkachuk all scored on the powerplay.  Brad Boyes picked up his 32nd goal of the season.  Goalie Manny Legace had an easy night, making 19 saves.  The Blues need to have more games like this.  The 35 year old goaltender is going to need to stay fresh down the stretch if the Blues hope to make a run at the playoffs.  Last night’s game was Legace’s 17th straight start and with no confident back-up his endurance could come into question.

Click on the link to hear Jackman talk about the resurging power play, and Legace on this team believing they can win.