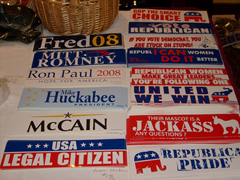 The Presidents Day holiday gives political junkies yet another opportunity to think of the presidential races and some of the merchandise – particularly collectibles – that go along with the campaigning.

Charlie Keihl works with GOP Trunk , which – as the name would imply – sells a lot of Republican buttons, badges, baseball caps, and so on. Keihl, who was selling souvenirs at the recent Lincoln Days weekend in Springfield, enjoys hitting the road and meeting fellow Republicans. Keihl says bumper stickers, lapel pins, and buttons are the big sellers because they are inexpensive and easy to bring home as souvenirs.

Bob Levine is nicknamed "Button Bob" by Democrats who see him at various party events. Levine, who works with a company named MADCO Printing & Advertising ,will be taking part in the big Missouri Democrat Days weekend in Hannibal early next month. Levine is a collector, as well as a seller, and has been since the 1960s.

Levine says the most valuable political buttons and badges tend to be those issued by local groups and organizations, such as unions.  The reason is simple: there are so few of those made.