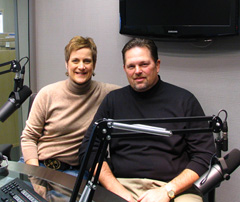 I really enjoyed this segment in the Press Box.  Doug and Kimie Bax are the parents of David Bax, a 6’2 220 pound linebacker who plans to play football at Southeast Missouri State next year.

I’ve been amazed at how fans follow football year round.  The reality is, the football season really only lasts five months.  The bulk of the games start the beginning of September and end the first couple days into early February with the Superbowl.

However, fans need an outlet, something to keep their interest for the other seven months of the year.  One way college football fans keep up on their favorite teams is to follow that school’s recruiting.  High school kids become numbers.  Their height and weight are analyzed, are they a three star, four star, five star recruit?  What’s their time in the 40?  How much can they bench?

I wanted to take a different angle on college recruiting and talk with two parents who just went through this process.  How does recruiting work?  What are the kids put through?  What issues must the parents wrestle with as major colleges and universities vie for a student-athlete’s commitment?  What have they learned and what can they share with other parents who may go through this ordeal in the future.