Defensemen Jay McKee followed in his own rebound shot to give the Blues the lead and a 4-2 win against the Los Angeles Kings last night in St. Louis.  McKee’s goal is first defensemen to score a goal in twelve games for the Blues.  Martin Rucinsky and Jay McClement had a goal and an assist for the Blues, who ended a four-game losing streak and won for only the third time in 14 games. The Blues have now won five straight against the Kings. 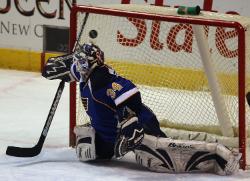 Alexander Frolov put the Kings on top with this goal over Legace’s shoulder 13:19 into the game. (Bill Greenblatt photo, UPI).  The Blues tied it at 1-1, :33 into the second period, but the Kings would regrab the leader later in the period.  Martin Rucinsky tied the game at 2-2, 9:01 into the 2nd, and the Blues added two more in the third.

In the pre-game warmups, Rucinsky caught Manny Legace up high with a shot that made Legace double over. Obviously, he returned to play sharp, making 25 saves for his 20th win of the season.  Click on the link to hear Rucinsky comment on the win and head coach Andy Murray talk about how he found out Legace got stung in the pre-skate.