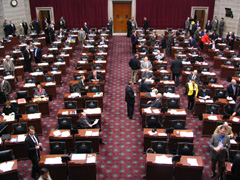 Missouri lawmakers are moving quickly to undo a measure that raised taxes on Kansas residents who work here, and raised the ire of Kansas lawmakers.

Missouri lawmakers passed a law that prohibits out-of-state residents from deducting their property taxes from their Missouri taxable income. It hits Kansans working on the Missouri side of the Kansas City metropolitan area especially hard. A typical Johnson County, Kansas resident who crosses the state line to work in Missouri would pay $191 more in Missouri income tax each year. The Kansas Legislature is poised to retaliate if the Missouri Legislature doesn’t repeal it.

Rep. Paul LeVota (D-Independence) sponsors HB 1661 that would do just that.

“I think we have a commitment that we’ll fight each other on the basketball court and the football field, but when it comes to economic issues and punitive taxes, we going to try to work together,” LeVota tells colleagues during House floor debate.

House Speaker Rod Jetton (R-Marble Hill) has been in close contact with the Kansas Speaker, providing assurances Missouri will change the law and warning Missouri colleagues if they don’t Missourians who work in Kansas will suffer.

The House in Topeka has approved a retaliatory measure and sent it to the Senate. Leaders in the Kansas Senate have promised to sit on the bill to see how Missouri responds. If Missouri approves the bill, Kansas will drop efforts to retaliate.

The House has approved the bill on a 145-to-0 vote. It now moves to the Senate.