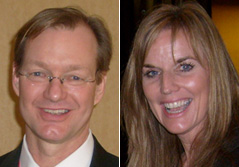 And then there were two. The weekend decision by Lieutenant Governor Peter Kinder to pull out of the race for Governor leaves State Treasurer Sarah Steelman and northeast Missouri Congressman Kenny Hulshof as the only announced Republican candidates for the post.  And neither has any plans to withdraw. Says Steelman: quot;I’m in it for good.” … Says Hulshof on the chances of his pulling out: “None! I’m in it!”

Steelman rejects suggestions that a primary could get nasty and split the party, saying the primary should give both sides the opportunity to appeal to voters by exchanging ideas.

Hulshof understands the concerns of Republicans who think back to the disastrous 1992 election year when three statewide officeholders – Attorney General Roy Blunt, State Treasurer Wendell Bailey, and Attorney General Bill Webster- ran for Governor and the GOP lost those three seats in addition to the Governor’s Office. Hulshof says the two-person race means that will not happen this time.

Attorney General Jay Nixon is the only declared Democrat in the race.