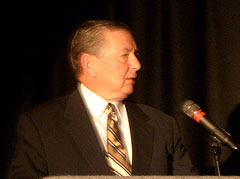 A major part of each year’s Lincoln Days dinner is the Saturday night dinner with its guest speaker. This year’s event, in Springfield, featured former U.S. Attorney General and Missouri Governor and Senator John Ashcroft.

Ashcroft went on to speak of the relationship between freedom and security.  "I think the role of security," said Ashcroft, "Is to enhance and enrich freedom, not to balance it, not to be a counterweight, but to be its protector and is insurer."

The former Attorney General made it clear he believes security measures such as the monitoring of telephone calls to or from terrorist nations is an effort to enhance America’s security and should be embraced.