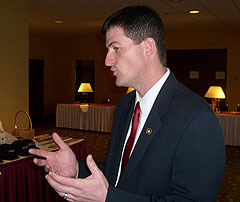 Lager made the announcement, in Springfield, during the Missouri Republican Party’s annual Lincoln Days weekend. Lager, who was elected to the Senate in 2006, says he is running because he believes "every dollar that is spent in this state is invested wisely … is spent wisely." Lager says when Governor Matt Blunt announced he would not seek reelection, there was a lot of thinking that Sarah Steelman would run for Governor and leave the State Treasurer’s race open. So, he has decided to run for the post.

Lager says Steelman has done a great job of promoting terror free investing and bringing money back into Missouri for investment here, and he wants to pick up where Steelman leaves off and continue to encourage people to invest in their children’s future through such vehicles as the Missouri Savings for Tuition (MOST) plan.

Lager says he does not believe Steelman will pull out of the Governor’s race and run for reelection as Treasurer. But he says he will step aside if she decides to do that.