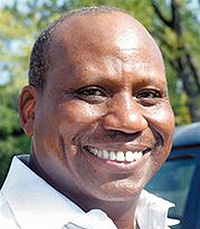 A shouting gunman who burst into the Kirkwood city council chamber has killed two police officers and three city officials before police killed him. Two other people, including Kirkwood mayor Mike Swoboda, have been hurt. Swoboda is in intensive care at a hospital with a head wound.

Police identify the shooter as Charles Lee "Cookie" Thornton, who often was a contentious spectator at council meetings. A few days ago, a federal judge dismissed Thornton’s lawsuit in which he claimed city officials violated his free speech rights by prohibiting him from speaking at meetings. Thornton was arrested twice in 2006 for disorderly conduct after interrupting meetings.

Thornton was elected into the Truman State Sports Hall of Fame and holds two records in the high jump.

Previous Post: « Mizzou Players Continue To Be In The Wrong Place At The Wrong Time
Next Post: Kinder Out of Race for Governor; Faces Opponent for Re-election »