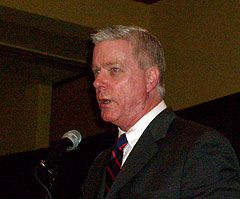 Lieutenant Governor Peter Kinder has withdrawn from the Republican race for the Governor’s Office.

The stunning announcement came during a banquet on the opening night of the Missouri Republican Party’s Lincoln Days weekend, held this year in Springfield. Kinder began his remarks to the ballroom by talking about his early days in politics in his native Cape Girardeau, then spoke of the need for party unity as he delivered the shocking news that he would pull out of the race for Governor and run for reelection as Lieutenant Governor.

"After a great deal of thought and prayer over the last several weeks," says Kinder, I have decided I will not run for Governor this year, and will ask Missourians for their vote for Lieutenant Governor so we can continue our accomplishments for our veterans, seniors, workers and our shared Missouri values."

However, his decision creates a contested primary race with an opponent who is upset with Kinder’s decision.  Former Representative Jack Jackson says he is "extremely disappointed" with Kinder’s decision.  Jackson says he received "repeated assurances" from Kinder that he was committed to the governor’s race before deciding to become a candidate for the job Kinder was giving up.  Jackson says he will challenge Kinder’s re-election, saying he is "the most capable person in the state dedicted to work hard for my fellow veterans, senior citizens and as an advocate for all the people of Missouri."