One of the Republicans in the race for the presidency has given up his White House bid.  Former Massachusetts Governor Mitt Romney (R-MA) has suspended his campaign, effectively ending it. 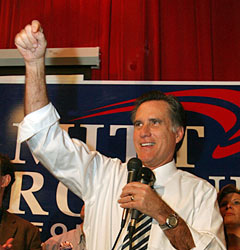 Romney had made a number of stops in the Show-Me State since he launched his campaign, picking up the support of Governor Matt Blunt (R-MO) and several legislative leaders, including Missouri House Speaker Rod Jetton (R-Marble Hill).  Jetton, in fact, became a consultant to the Romney campaign.

Governor Blunt has released a statement in which he expresses disappointment.

"Obviously I am disappointed because I believe Governor Mitt Romney was the best candidate to bring conservative change to Washington. Governor Romney is a great leader and a tremendous competitor," says Blunt.  "I am proud to have supported his campaign."