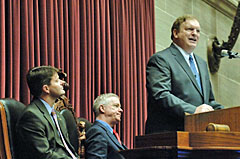 The "perfect storm" involves what Rahn says are three major factors "stirring up gale force winds that are coming like a freight train set to arrive in 2010."  The factors include an end to Amendment 3 money, which will be used up; A slashing of federal funds given to states for transportation projects, and; Rising costs associated with materials needed to build and repair roads and bridges.

Rahn says additional funding will have to be found somewhere, but stops short of suggesting an avenue down which to proceed, saying it will have to legislators who come up with the answers.  Says Rahn, "While the public has filet mignon expectations, MoDOT has Filet O’ Fish funding."