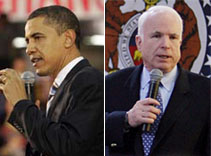 e the early lead former Arkansas Governor Mike Huckabee built to win on the Republican side.

The Republican race was close throughout the evening with Huckabee taking the early lead, McCain close behind and former Massachusetts Governor Mitt Romney trailing not far behind in third. McCain seized the lead late and never relinquished it. With nearly all precincts reporting, the unofficial tally gave 193,908 votes to McCain or 33%. Huckabee finishes with 185,446 votes, 31.5%. Romney garnered 172,205 votes or 29.3%. Texas Congressman Ron Paul finished a distant fourth with only 26,402 votes, 4.5%.

Clinton had a sizeable lead for some time on the Democratic ticket. Obama continued to narrow the gap throughout the night, taking over the lead with a strong showing in the St. Louis and Kansas City areas. Obama edges Clinton 403,343 votes to 394,566; an incredibly tight race as Obama wins with 49.1% of the vote over 48.1% for Clinton.