With the game tied at two, the St. Louis Blues turned the puck over three times in the third period leading to three Tampa Bay Lightning goals.  The Blues would score two goals late, but come up short 5-4. 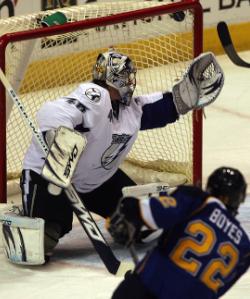 Keith Tkachuk scored his fourth goal in four games, and Brad Boyes scored his 30th of the year in the first period.  He’s the first Blues player to score 30 goals in a season since Tkachuk scored 33 in the 2003-04 season. (photo by Bill Greenblatt, UPI)

The Blues have picked up just six points in the last eleven games with only two wins in that stretch.  The Blues have 55 points and sit in 12th place, six points behind Colorado for the 8th spot in the Western Conference.