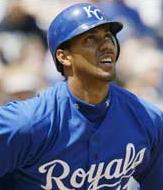 The Cardinals are giving Juan Gonzalez another chance.  He was invited to Jupiter as a non-roster player.  The 38 year old hasn’t played since 2004.  Juan Gone a two-time American League MVP has 434 career homers.  Albert Pujols, who has been working out with Gonzalez, pushed for the Red Birds to give him a chance.  Gonzalez last real action came in 2004 when he played in 33 games with the Royals.  He had one at-bat with the Indians in 2005.

Tony LaRussa has always been a big fan of veteran players.  This may give LaRussa that experienced bat he’s looking for.  With So Taguchi not retained, Jim Edmonds traded and Juan Encarnicion unlikely to play, the Cardinals are thin in the outfield, or at least inexperienced.

The problem I would see with Gonzalez is his durablility.  As I mentioned earlier, he played 33 games in 2004, just 82 games in 2003 and in 2002, just 70.  Now add a few more years and rust, I don’t see much upside here.  If Pujols is making the push for his buddy, the Cardinals may feel some obligation to at least give Gonzalez a look.