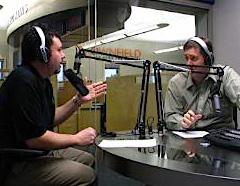 It started out as a friendly "let’s talk about the big game at work" conversation, but quickly became heated between Missourinet Sports guy Bill Pollock and Missourinet News reporters Brent Martin and Steve Walsh, when Bill made the observation that he thought the first 49 minutes of the Super Bowl were boring!

Listen in as the three talk about the sights and sounds of the Super Bowl and why Bill thinks this shouldn’t be considered one of the best Super Bowls of all-time.