Missourians go to the polls today in the state’s presidential primary. But for some voters, the presidential candidates won’t be the only names on the ballot.

Vacancies are being filled in three Missouri House distri 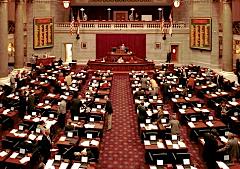 cts – District 16 in St. Charles County, District 65 in St. Louis, and District 158 in Cape Girardeau. The St. Louis seat was held by Democrat Fred Kratky, who resigned, and is being contested only by a Democrat, his wife. Districts 16 and 158 were held by Republicans Carl Bearden and Nathan Cooper, respectively, and are being challenged by both Republicans and Democrats, with the Libertarians vying for the Cape Girardeau vacancy.

Missouri Republican Party Communications Director Paul Sloca realizes the importance of keeping these two seats in the GOP column and he feels good about holding onto the seats.

Jack Cardetti with the Missouri Democratic Party accepts that it will be tough to make a pick up, but he knows the Democratic candidates are giving it their all. Cardetti says picking up either of the two seats in Republican strongholds would be a shot in the arm for Democrats across the state.

The polls are open until 7 o’clock tonight.