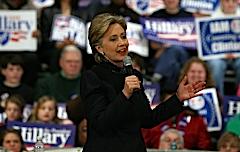 The weekend before Super Tuesday sees Mitt Romney, Hillary Clinton, and Barack Obama in the St. Louis area. She spoke to a predominantly black church congregation, and then to about two-thousand people gathered at a union hall in Bridgeton.

As people were entering the church, they could pick up copies of the St. Louis American, a newspaper whose audience is the black community. The newspaper headline proclaims the paper’s endorsement of Barack Obama. Romney talked to supporters in Maryland Heights.

Republicans John McCain and Mike Huckabee stopped in Missouri on Friday. McCain spoke in Chesterfield Friday afternoon, while Huckabee addressed a crowd in Springfield on Saturday. Former President Bill Clinton campaigned, on behalf of wife, Hillary, in Columbia and Springfield.