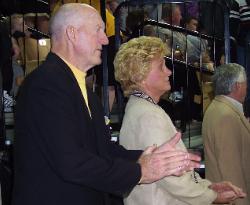 When Mizzou men’s and women’s basketball were powerhouses in the Big 8, Norm Stewart and Joann Rutherford stormed the sidelines.  Rutherford, Mizzou’s most winningest coach for any women’s program with 422 career wins coached for 23 years and won 4 Big 8 titles.  Stewart, whom Mizzou Arena’s court is named after, coached 32 years and amassed 634 wins with 8 Big 8 titles.

They joined five others as the 2007 class in the Mizzou Hall of Fame.  All of the inductees were enshrined Friday night in Columbia and honored at halftime of the MU-K-State game