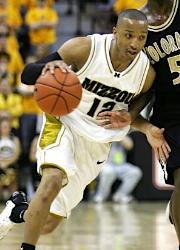 Missouri senior guard Jason Horton, one of five players suspended from the basketball team after a nightclub fight early Sunday morning, was arrested Friday and charged with third-degree assault. His was the first arrest in the case.

An employee of Club Athena said he was attacked and identified Horton.  All five players are still suspended however, Leo Lyons and Marshall Brown did dress for the K-State and saw action.

Columbia police say the investigation is still ongoing and more arrests may be made.