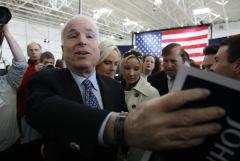 United States Senator John McCain (R-Arizona) brought his presidential campaign to Missouri just days before the state’s presidential primary. McCain gave a brief address to supporters gathered at the Spirit of St. Louis Airport in Chesterfield. He told the group that it’s not long until Tuesday when he says the country will have the closest thing it has ever had to a national primary.

McCain addressed many issues, but hit hard on terrorism and the war in Iraq. He promised to capture the leader of Al-Qaeda.

"And my friends, I want to look you in the eye and tell you, ‘I will get Osama bin Laden.’" McCain said, "I will bring him to justice. I know how to do it."

McCain called Iraq a long, hard, tough war that has turned the corner since President Bush put General David Patraeus in charge. McCain said he stood up early and criticized how former Defense Secretary Donald Rumsfeld was handling the war. He said Patraeus has the right strategy to win.

McCain endorsed the economic stimulus package worked out between the Bush Administration and Democratic Congressional leaders. He says government spending must be cut and suggested that it was wasteful spending, not the war in Iraq, that led to Republican losses in 2006. He says the Republican-led Congress eroded its base by overspending.