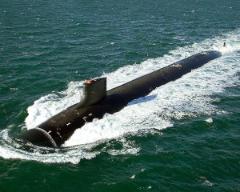 In U. S. Navy history, the word "Missouri" and "Battleship" are almost automatically together.

But the newest warship to carry that name won’t be a battleship.

It will be a submarine that’s 25 percent longer than a football field, goes at leat 28 miles an hour under water, and will operate with a nuclear power plant that will not need refueling for about thirty years.

The new Missouri will be one of three new Virginia-class attack subs to be built by the Navy. The Virginia class is described by the Navy as "the first U. S. submarine to be designed for battlespace dominance across a broad spectrum of regional and littoral missiions as well as open-ocean, "blue-water" missions."  The Missouri is scheduled to be the seventh Virginia-class sub built.

The Navy says the Virginia class is designed to be highly-flexible tomeet changing missions and threats and will accept new technologies that will keep it up to date well into this century.  In fact, says the Navy, the sonar system on the Missouri and other Virginia-class submarines "has more processing power than today’s entire submarine fleet combined…"

Congressman Ike Skelton of Lexington, who knows his history, says it will be the fifth Navy ship bearing the state’s name. The first Missouri was a side-wheel frigate that was one of the first steam warships in the Navy, at a time when steam-powered ships still had sails. It burned at Gibraltar while taking the American Ambassador to Egypt in 1843. The second Missouri was part of Theodore Roosevelt’s "Great White Fleet" that toured the world, 1907-1909. Skelton’s father was a fireman on that Missouri during World War One. The ship was scrapped in 1922 under a treaty limiting naval armaments.

The most famous Missouri, launched in 1944, is the ship on which the Japanese surrender was signed, ending World War Two. It also saw action in the Korean War and in the first Gulf War. It’s now berthed at Pearl Harbor and is open to tourists.

There was a one more Missouri but Skelton doesn’t count it. It was a Confederate ironclad gunboat that was so leaky when the Union got it at the end of the war that it that it was scrapped and never put into the service of the U-S Navy.

Skelton says it will take about two years to build the new Missouri, which will carry 38 weapons and will be operated by a crew of 113.

(Our thanks to King City, Missouri native Dow Rogers, a retired Navy Submarine Master Chief who is now a civilian field engineer for the Department of the Navy at the Submarine base in Groton, Ct., for providing some expert guidance in preparation of this story.  The Virginia-class subs are being built there.  He tells us the Chief of the Boat and about 50 other men will be reporting for duty on the Missouri later this year as the commissioning crew that will see the Missouri through its construction and testing phases.).