In Jefferson City a crowd of about 150 supporters including approximately two dozen state legislators who back the former Arkansas Governor jammed into a large conference room of Associated Industries of Missouri, a business lobby group. 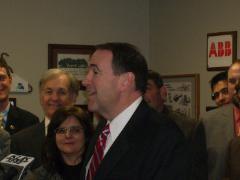 Huckabee’s speech focused on familiar themes: Huckabee’s pro-life position, the importance of Missouri and its residents in the electoral process, national security, energy self-sufficiency, and the need for a fairer tax system. Huckabee even took time to joke about the Missouri Tigers’ thrashing of the Arkansas Razorbacks in the New Year’s Day Cotton Bowl Game, saying, "Oh, that was painful watching that … I gotta tell you. I might not have had such a big crowd if that game turned out differently. I thought you guys were coming to support me, but now I realize it’s just to rub it in for New Year’s Day."

During a question and answer session with a handful of reporters following the public event, Huckabee commented on what some Republicans consider his lack of conservative credentials. Conservative talk radio host Rush Limbaugh, a native of Cape Girardeau, has suggested that if Huckabee or Senator John McCain (R-AZ) were to win the Republican nomination, Limbaugh might "sit this one out." Asked whether he would make overtures to Limbaugh, Huckabee, replied, "I’ve actually made several overtures. I’ve e-mailed him on several occasions. I’ve asked to meet with him. He indicated that he would, but then he never has gotten back to me to set a time or place or have a phone conversation. It’s pretty evident he’s supporting Mitt Romney and that’s his right, but you know I think his listeners will make up their own decisions."

Huckabee insists he is running to become President, not to become a kingmaker. "I don’t think anyone works this hard," says Huckabee," Just to say I’d like to go to the convention and throw my support to somebody. I think we have a very serious chance of becoming the nominee and becoming President."