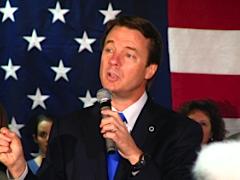 (D-North Carolina) brought a populist theme to a Jefferson City rally a week prior to Missouri’s presidential primary. Edwards has completed a two-day swing through Missouri, first stopping in Springfield then in Jefferson City.

Edwards spoke in front of a huge American flag as more than 200 supporters crowded into The Fraternal Order of the Eagle Banquet Hall in Jefferson City and stated that the Bush Administration has left out millions of Americans. Edwards said he was the only one of the three Democratic candidates for president who stands for working class America. He said the economy has grown during the Bush years, but has left out working people.

Edwards called the country’s health care system "dysfunctional". He said health care should be seen as a right, not a privilege and vowed that if elected president he would push for universal health care. Afterward, he said his campaign is crunching numbers, but estimates his plan would cost between $90 and 120 billion. Edwards said he could pay for it by eliminating the Bush Administration tax cut for those making at least $200,000.

Many farmers attended the rally and Edwards said he favors family farms and would move against concentrated animal feeding operations. He also backs raising the minimum wage to $9.50, increasing access to college and ending the Iraq War immediately. [ Photo & Video by Jon Allison ]