Former Missouri football coach Larry Smith passed away on Monday in a Tucson, Arizona. hospital after a long battle with Luekemia.  Coach Smith was 68.  (Coach Smith with players of that 1998 team honored at a Mizzou game in October.  Courtesy, Bill Greenblatt, UPI) 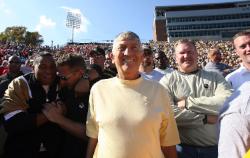 He was Mizzou’s head coach from 1994-2000, and in 1997 Missouri’s team went 7-5 and reached the Holiday Bowl, which broke a 13-year bowl game drought for the school.  The 1998 team was one of the best in the nation, going 8-4 with all four losses to top-10 ranked teams (with three of them by seven points or fewer).  That team won the Insight.com Bowl that year, marking MU’s first bowl victory since 1981.

Here’s what members of the Tiger community are saying:

“Naturally, this is a tough blow.  Our thoughts and prayers are with Cheryl, Corby, Alli and everyone in that wonderful family.  Coach was an outstanding football coach and an even better man.  He’ll be dearly missed.”

Andy Hill, Assistant Football Coach who coached under Smith from 1996-2000

“Larry Smith was a great man.  He was a very passionate man about the game of football and even more so about his family.  He got Missouri back into bowl games after such a long drought, and he’ll always be remembered fondly for that.”

Barry Odom, MU Assistant Athletic Director for Football Operations, and letterwinner from 1996-99 under Smith at Mizzou

“First and foremost it is a sad day for college football, the University of Missouri and all of those that had the opportunity to know Coach Smith and his family.  I want to give my condolences to the family – they are a special group of people who have had a tremendous impact on many, many lives.  I remember Coach Smith as a tremendous leader and motivator.  He was a great person and I think those that knew him will agree that he made each person he came in contact with a better person.  He cared about much more than football with his players.  He cared about relationships and was sincere and honest.  He and his wife Cheryl were upstanding community members and did so much for Columbia and the State of Missouri.  One of the greatest memories I will keep forever is when we beat Colorado in 1997 to become bowl eligible – it was a great moment for all of those involved with Mizzou Football.  Coach Smith was always able to express his emotions – we knew he cared about his team.”

“I always had a tremendous amount of respect for Coach Smith and the successes he had at Arizona, USC and Missouri.  I followed his career for a long time in the PAC-10, when I was at Washington, I used to coach against him, and I saw him build programs, and I saw the tremendous influence he had on young people.  I was always impressed with him as a person and just had a lot of respect for him, and I’m very sorry for his family’s loss.”

Mark Alnutt, MU Associate Athletic Director and letterwinner from 1994-95 under Smith at Mizzou

“My thoughts and prayers are with Coach’s family at this time.  I was very fortunate to play under Coach Smith during my final two years at Missouri.  I knew he was the right person to lead Missouri back to it’s winning ways with his approach to discipline and coaching mental and physical toughness.  I also owe Coach Smith for giving me an opportunity to begin my career in athletics.  If he had not given me a chance to work on his staff, I don’t know if I would be where I am today.  To Larry, rest in peace and understand that you will be missed by many people that you have touched over your career.”

“Coach Smith was a man of great integrity who was known for his mentoring of young men for such a long time.  I’ll always remember him as a person of unquestionable character and outstanding leadership.  He did a lot for this University in his short time here, not just on the football field, but in the community, especially with the Central Missouri Food Bank.  He helped raise a lot of money for a very important cause, and he was wholeheartedly behind that.  There is no question that he’ll be sadly missed.”

Mike Kelly, Voice of the Tigers

“Larry was an incredible person who wore his emotions on his sleeve, you always knew how he felt about in issue.  He loved his players to the ultimate degree.  He will go down as guy who helped give Missouri fans hope in a short amount of time.”