Blues goalie Manny Legace was St. Louis’ lone representative in the NHL All-Star game on Sunday in Atlanta.  Legace has been phenominal for the Blues with a 2.28 goals against average this season. 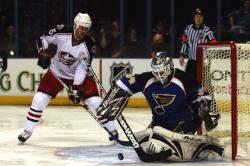 Legace took the loss for the Western Conference as the East came back from a goal down late in the third period, to score with 20 seconds left to give the East an 8-7 win.  However, Legace came up big in the third period at one point stopping four point blank shots in a row.

One cool feature the NHL added to their broadcasts was micing up the goalies.  Had play-by-play guy Mike Emrick not distracted Legace he wouldn’t have given up the tying goal late in the third period.  You’ll hear Mike Emrick say something to Legace just before he gives up the tying goal.  (Emrick also had a hand in helping East goalie Mike DiPietro give up the fastest goal in NHL All-Star history when Emrick was talking to DiPietro right at the start of the game, and Rick Nash scored :12 into the game).  Then, with :20 left, Legace got beat by All-Star MVP Eric Staal,

Click on the link to hear the big plays involving Legace as well as his comments from the ice.

Previous Post: « College Basketball Roundup
Next Post: Clinton: "I’m Going to Take My Case to the People" of Missouri »