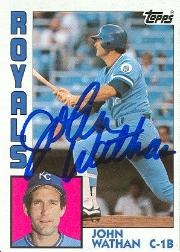 On Sunday, February 10th, former Royals catcher John Wathan will be inducted into the Missouri Sports Hall of Fame.  John played 10 seasons with the Royals and appeared in two World Series.  John was one of those players who knew what his role was on a team filled with superstars.  He figures he’s getting inducted into the Hall of Fame due to his longetivity and versatility in the game.

John talks about his time with Royals, how he helps players in the Royals system now, and what does a catcher say to a pitcher when he visits the mound?  Click on the link to hear John Wathan in the Press Box.