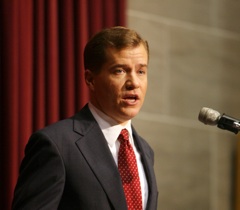 A shocking announcement from Governor Blunt’s Office. Blunt has announced he is NOT running for re-election.

A statement from the Governor’s Office says Blunt has released a television address in which he claims he has achieved virtually everything he set out to accomplish when he ran for Governor and will not seek re-election.
[ Photo by Bill Greenblatt, UPI. 2008 State of the State ]

Fellow Missourians. Let me speak directly with you.

In 2004 I promised leadership, vision and change. It was morethan a slogan, it defined a mission. You elected me to chart a newcourse.
And together we are creating a future of greater opportunity for all Missourians.

We inherited a budget that was $1.1 billion dollars in the redand turned it into three straight surpluses without increasing taxes.In fact, we cut taxes.

In contrast to the old education withholdings and cuts, mybudgets will have delivered 1.2 billion new dollars to ouruniversities, classrooms and students.

A broke and broken Medicaid system is being transformed into anetwork of care offering vulnerable Missourians healthier lives at acost taxpayers can afford.

We have turned record job-loss into nearly 90,000 new jobs.

Hundreds of millions of dollars in waste has been eliminated and we reduced the size of government.

What we set-out to achieve four years ago has been accomplished.

Once when asked if he were running for re-election anothergovernor responded, "Yes, I like being governor." When I read that Ithought at the time that I never wanted to run for any office just tohold it. I did not run for governor to have a title, but to bringchange to state government.

I know the habit of politicians is to remain in office and thedesire to prove oneself in the next election is strong. After a greatdeal of thought and prayer, and with the knowledge that we haveachieved virtually everything I set out to accomplish, and more, I willnot seek a second term in the upcoming election. Because I feel we havechanged what I wanted to change in the first term there is not the samesense of mission for a second.

At the end of my term, I will have served twenty years in publicservice, ten years in the United States Navy followed by ten years instate government. Melanie and our son William Branch mean the world tome. I have spent more time away from them than I would like. We areready for the next chapter in our lives and I am looking forward tospending more time with them.

Some will wrongly think that this is a retirement from theeffort to improve the lives of Missourians. They will have failed tounderstand that the greatest and wisest leadership of our state is nothoused within the ornate offices of the Capitol. It springs from ourcitizens, communities, churches and institutions of private life.

There are new and important initiatives we can achieve this year.
Their success will help keep the change working for Missouri families.

To serve as your governor is a great privilege. I will continueto work every day to be worthy of the faith and confidence you haveplaced in me.

Thank you for listening and may God continue to bless our great state.