The St. Louis Cardinals today announced the signing of catcher Yadier Molina to a four-year contract extension with a club option for a fifth season. With today’s deal, the Cardinals and Molina avoid salary arbitration and keep one of the games’ best young catchers in a Cardinals uniform through at least 2011.

Drafted by the Cardinals in 2000, Molina has already established himself among the top all-around catchers in his first three seasons as an every-day catcher.  Molina leads all Major League catchers in both catcher’s stolen base pct. (47%) and pick-offs (18) since 2005, and he ranks among the National League’s top clutch-hitting catchers; posting a .279 (4 th in NL) batting mark with runners in scoring position and a .289 mark (2 nd ) with two outs and runners in scoring position. (photo by Bill Greenblatt, UPI)

"Yadier possesses game-changing ability both in the field and at the plate," said 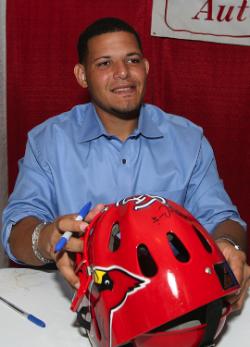 Cardinals’ Vice President/General Manager John Mozeliak, who made the announcement at the team’s 12 th Annual Winter Warm-up event.  "From his dramatic homer in the 2006 NLCS to his handling of pitchers, Yadier has shown that he is a special talent when it comes to the all-important challenges of the catcher position.  We are thrilled to have him signed for the next four years."

Yadier posted a career high .275 batting average this past season, including a 15-game hitting streak, the longest by a Cardinals catcher since 1993. He ranked 5 th among N.L. catchers in batting (.281) following the All-Star break.  His career totals include a .248 batting average, 22 HR’s and 153 RBI in 405 games. Molina missed most of June with a non-displaced fracture of his left wrist and he underwent a medial menisectomy of his right knee in late September.  Molina is expected to be ready to take part in full activities when spring training begins next month.