The Cardinals Caravan made a stop in Jefferson City a met with a couple hundred faithful fans who came out to meet young uprising stars Brendan Ryan, Skip Schumaker, Ron Flores, and Brian Barton, along with former players Jack Clark, John Costello, and Danny Cox.

After the Jeff City, the Caravan went to Mizzou Arena to watch the M 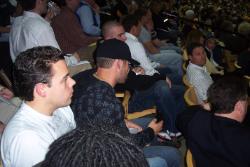 U-KU game and happened to be sitting in front of me at press row.  So I decided to spend some time with Costello, Flores, and Cox.  Click on the link to hear the interviews which run back to back in the order mentioned.

Costello pitched four major league seasons, three with the Cardinals and went 11-6 with a 2.97 ERA over his career.  Ron Flores, joins his brother Randy in the Cardinals organization looking for a spot on the team.  Prior to this season, he spent the past three with the A’s.  Danny Cox pitched eleven years in the major, his first six with the Cardinals.  He had a career 3.64 ERA and was lucky enough to pitch in three World Series.