After the Cardinals Caravan came through Jefferson City, I poked Cardinals short stop Brendan Ryan on the shoulder during the second of the MU-KU game and asked him if he wouldn’t mind talking with for a few minutes. 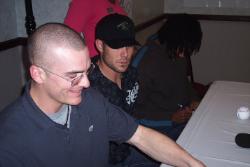 Ryan had a great major league debut last year in which he hit .289 and showed the type of hustle Tony LaRussa likes.  During a VIP meet and greet in Jeff City, I caught him off guard by asking him if he was bummed out that the Cardinals signed Cesar Izturis after David Ecstein went to Toronto.  This time, I rephrased the question, but also asked him some other questions about life as a young major leaguer and what he expects this spring and summer for himself and the team.