With Super Tuesday and the Missouri Presidential Primary just over two weeks away, the Show-Me State is getting some attention and visits from the candidates for the White House.

Several of the Democrat and Republican hopefuls have campaigned in Missouri in recent months, and now that the sprint to February 5th is on, this state is getting a little more attention.

Two of the Democrats who want to represent their party in November campaigned in the St. Louis area on Saturday. Former Senator John Edwards (D-NC), who ran as Senator John Kerry’s running mate in 2004, campaigned at a union hall in St. Louis, touching on his populist theme of the need for the middle class to succeed in its struggle with corporate interests. 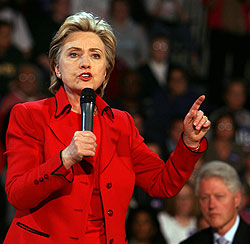 Saturday night, at a high school in Florissant, Senator Hillary Clinton (D-NY) appeared with her husband, former President Bill Clinton, talking up her plan to rebuild the middle class, in part by expanding access to health care.

Senator Barack Obama (D-IL), among the candidates who has recently visited Missouri, has indicated he, too, will re-visit prior to the February 5th balloting.