The Kansas Jayhawks remain unbeaten after they beat the Tigers 76-70 Saturday night at Mizzou Arena.  With the win, the Jayhawks move to 18-0 and will move up to at least #2 in the country following UNC’s two point loss.

The Tigers came out of the gate red hot, jumping out to a 7-1 lead.  The game would go back and forth throughout the night with ten lead changes through the game. 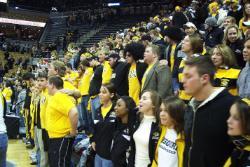 The game really lacked much of a flow as the officials called a tight game and blew the whistle quit often.  It appeared, and I’m not being a Mizzou homer here, but there were a lot of questionable calls that seemed to always go into KU’s favor.  Not using that as an excuse, the fact is heading into the second half, with the score 38-36 at the half, KU extended their lead to as many as 8 with seven minutes to play thanks in large part to poor shot selection by the Tigers and a 38-14 advantage for KU on the defensive boards.