Scot Nichol scored two short handed goals in the second period for Nashville, as the Predators beat the Blues Saturday afternoon 5-2.  It’s the Blues fourth loss in a row (0-3-1).  The Blues have been outscored 21-9 in the last four games. 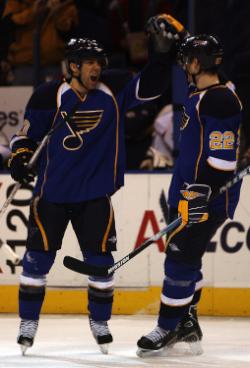 This was Nashville’s first win in four tries against the Blues this year.  Goalie Manny Legace who hurt his right arm on Wednesday in Chicago was back in the lineup and was not happy with his.  He said he played "just horrible," and that three of the five goals the Preds scored should have never gone in.

The Blues get another crack at the Predators on Monday in Nashville.