Georgia Frontiere, owner of the National Football League’s  St. Louis Rams, passed away in Los Angeles today.  She had been hospitalized for several months with breast cancer. 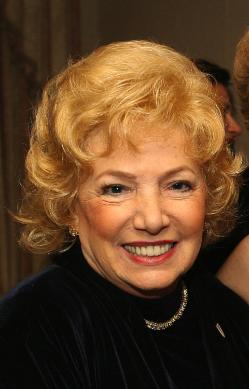 Frontiere, 80, was principal owner of the Rams since inheriting the team from her husband Carroll Rosenbloom in 1979.  Georgia was one of the few active female owners of a major professional franchise.  She is survived by two children, son Dale (Chip) Rosenbloom and daughter Lucia Rodriguez, six grandchildren, and Earle Weatherwax, her companion of 19 years.

Under Georgia’s ownership the Rams were based in Los Angeles from 1979 until 1995, when Frontiere relocated the franchise to St. Louis, her hometown.  The St. Louis Rams were Super Bowl champions in the 1999 season and NFC champions in the 2001 season. (Photo by Bill Greenblatt, UPI)

"Our mom was a beautiful person who lived an extraordinary life.  She put up a courageous and brave fight.  Thanks to her doctors and her spirit we were blessed with more time with her than expected.

"Our mom was dedicated to being more than the owner of a football team.  She loved the Rams’ players, coaches, and staff. The warmth and generosity she exuded will never be forgotten.

"She will be missed by those who loved her and will be remembered as a kind and generous person. We will love her forever."

Statement from John Shaw, President of the Rams:

"It’s been my privilege for twenty-eight years to work for a loyal, generous, and supportive owner who was totally committed to her football team.  This is an enormous loss for me and for the Rams’ organization. All of our prayers and sympathy go out to her family."