The Blues were hoping they would come out with a litte more energy than they did following their 6-4 loss at Columbus.  Fatique could certainly be a factor as Sunday’s game was the Blues fifth game in eight days.  (Christian Backman scores in the first period off Canucks goalie Robert Luongo, Bill Greenblatt UPI) 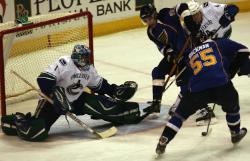 They’ve had a great run in the past week, with a 3-2 record and seven points following the point they picked up in last night 4-3 overtime shootout against Vancouver.

Brad Boyes scored a power play goal to tie the game at three with 8:45 to play.  He along with Paul Kariya and Andy McDonald missed opportunities to score in the shootout.  The Blues are now 0-6 this year in overtime games this year.