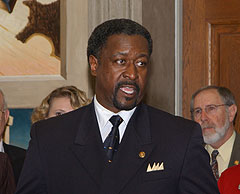 A state representative has pleaded guilty to a charge stemming from a credit card scam and has agreed to resign his office.

Rep. John Bowman, Senior (D-St. Louis) has pleaded guilty to a misdemeanor and likely will not face any jail time, but will be placed on probation. As part of the plea deal, Bowman agreed to step down from the House of Representatives at the end of the month and to not run for political office while on probation.

Bowman’s official plea is that he paid Bank of America Vice President Robert Conner $1,000 to influence the approval of a credit application. A jury last month found Conner guilty of 36 charges filed against him. Federal prosecutors say Conner recruited several people, including Bowman, to submit false applications for small-business credit cards and reaped kickback payments. The scam is said to have cost Bank of America $1.5 million. All those involved with Conner have pleaded guilty.

Bowman has confessed to bribing Conner and that he included false information on his credit card application. Prosecutors say Bowman owes $22,000 in restitution to the Bank of America. Bowman will be sentenced April 3rd. [ Photo: Tim Bommel, Missouri House of Representatives ]