Brad Boyes scored two goals, Paul Kariya had a goal and an assist, the Blues beat the Dallas Stars 4-2. 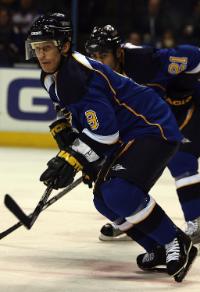 Goalie Manny Legace has been hot, he played again last night, made 25 saves in the game.  The Blues are at the half way point and are in 8 th place with 22 wins.  Last year at this time, they had just 13 wins and in 15 th place in the conference.  As far as Legace, his effort has not gone unnoticed.  He has been named to the Western Conference All-star team.

Kariya has been amazing against Dallas in the last two meetings, scoring four goals and five points.  Two weeks ago in Dallas, he had a hat trick in the third period to force a game into overtime.  (Photo by Bill Greenblatt, UPI)