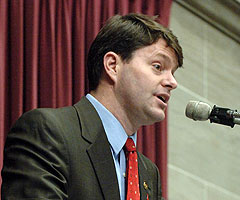 House Speaker Rod Jetton (R-Marble Hill) dismisses suggestions that the 2008 election will overshadow the work of the legislature this year. Jetton, in an opening day address to the Missouri House, has welcomed a new Minority Floor Leader and has called for bi-partisan cooperation on four priorities for the 2008 session which runs until mid-May.

Two of Jetton’s priorities focus on education. He proposes raising the minimum teacher salary in the state to $31,000. Jetton says that will depend on what budget writers tell him the state can afford and might rely on local school districts funding a portion of the increase. The current state minimum salary for teachers is $23,000. It is set to increase one thousand dollars each year for the next few years.  Jetton also wants to pass The Teacher Protection Act, which would give school districts greater authority to deal with unruly students.

Jetton says the legislature needs to address property tax relief, especially for senior citizens. He says some homeowners are being forced out of their homes due to an ever-increasing tax burden. The final priority is stopping illegal immigration.

Jetton says the House has made a huge difference in the average Missourian’s life the past few years when it has been under Republican control. Among the highlights he outlines are a better state budget, increased funding of public schools, better roads, lower taxes, fewer abortions and a more robust state economy.