The St. Louis Blues lost to Detroit 5-0.  This was the second time in six days Detroit visited St. Louis.

The game had a playoff type atmosphere early in the game as the 19,000 plus fans were cheering and chanting anit-Detroit cheers even before the game started, but Detroit built a 4-0 lead midway through the game and by the end of the second period, fans were booing.

Goalie Manny Legace said he was the worst player on the ice giving up four goals on sixteen shots.  Red Wings defenseman Nikolas Lidstrom, who just signed a two year extension with Detroit scored the first goal of the game. 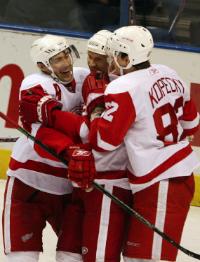 19 year old rookie David Perron scratched from the game for missing his flight back from Quebec over the Christmas break.