The University of Missouri and Head Football Coach Gary Pinkel have agreed to terms on a new five-year contract that will keep Pinkel on the Tiger sideline through the 2012 season. The new deal, as announced by Director of Athletics Mike Alden, comes on the heels of Mizzou’s historic 2007 season that saw the Tigers win 11 regular-season games for the first time in school history, and reach number one in the rankings for the first time since 1960 (and for only the second time ever). The new deal runs through Dec. 31, 2012, and replaces Pinkel’s previous contract, which was set to have expired Dec. 31, 2011. 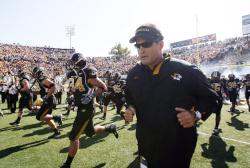 Pinkel, in his seventh year at Mizzou, has the Tigers at 11-2 currently, and playing in the Cotton Bowl for only the second time in school history, when they take on Arkansas, Jan. 1, in Dallas, Texas. The only school in 2007 to defeat two BCS bowl teams (Illinois and Kansas), Mizzou won its first-ever Big 12 Conference North Division championship this season under Pinkel’s direction, and those exploits won him Big 12 co-Coach-of-the-Year accolades, as well as runner-up Associated Press national coach of the year honors.

The upcoming Cotton Bowl appearance will mark the program’s fourth bowl game in the last five years under Pinkel’s guidance. The `Dean’ of Big 12 North coaches, Pinkel is 48-37 at MU and 121-74-3 in 17 seasons overall, with his 48 wins ranking as third-most in MU history.